Every December, thousands of volunteers from around the United States will gather to show thanks and appreciation to fallen members of our armed services. At cemeteries all across the nation, these volunteers will be laying wreaths on the headstones as part of Wreaths Across America. However, for my mother and me, it’s a very special occasion. I’m sharing with you my personal experience in the hopes of inspiring you to join in on this momentous occasion in 2018.

In October of 2013, I began a new job as the member of a marketing team for an online university. I quickly made friends with my colleagues, and almost a month after starting my new position received an invitation to participate in Wreaths Across America. After some follow up verbal invites, I reluctantly accepted.

I knew two things about this event. First, we would be laying wreaths on headstones in Arlington National Cemetery. Second, I’d need to be awake well in advance of 6AM in order to meet the obligations I had agreed to. Perhaps now you understand my reluctance to commit to participating in the event. However, my grandfather is buried at Arlington Cemetery, and I was hopeful I might be able to lay the wreath on his headstone.

In the days leading up to the event, there were a flurry of emails. These communications outlined everything from arrival time, meetup locations, truck teams, and more. I quickly realized that I wouldn’t be able to show my face and roll out while no one was looking. Furthermore after doing some research, our section was nowhere near my grandfather’s burial plot. At this point it was the day before and too late to shirk my responsibilities.

Morning Of Wreaths Across America

As you can guess, my alarm clock went off, and I instantly regretted my decision to participate. It was just as dark as when my head hit the pillow, and I was fairly certain that I hadn’t even gotten to sleep. After a quick shower, I hopped in my truck to start the long trek north on interstate 95 toward Arlington.

After passing through the gate, I met up with my co-workers, and the morning chill set in. I’m pretty sure a cold front had moved in from the arctic circle, and I began to wonder if this event was more befitting a migration of penguins, rather than a wreath laying ceremony. Nevertheless, we made our way to the meeting spot within the cemetery.

Now I’m no mathematician, but the number of volunteers was dwarfed by the number of gravestones in Arlington National Cemetery. I wasn’t sure we would complete our section, let alone the whole of the cemetery. Things were looking bleak.

A Turn Of Events

After arriving in the amphitheater, the speaker began shouting instructions to the crowd. Fortunately, during this phase I realized that other volunteers would arrive later in the morning. Furthermore, I learned that I would be able to lay a wreath on my grandfather’s headstone. Perhaps this wasn’t going to be all bad after all.

After an hour of chilling — literally — we made our way to our designated location, and I was told I should join the group going to my grandfather’s section. “Uhhhhh, which one is that?” I remarked as the crowd dispersed. I began walking with a group that believed they were headed to the section were my grandfather was laid to rest.

Surprise, it ended up not being the right group. Fortunately, I had downloaded an app that allowed me to lookup the necessary information, and soon made my own way to his plot.

As I wandered one of the roads alone, the sun began to rise. The power of this place became apparent, and I was instantly lost in quiet reflection. As I approached my final destination, I saw families huddled together over gravestones. Women appeared to be crying while the men that accompanied them remained stoic. This was not what I had expected to experience at all.

I later found out that many of the graves nearest my grandfather were actually new, and a somber feeling began to set in. So many of these great members of our Armed Services had made the ultimate sacrifice, and yet only a skeleton crew was here to pay homage to them. I also felt a twinge of guilt for having wanted to sleep an extra couple of hours, rather than drag myself out of bed to be part of something bigger than myself. 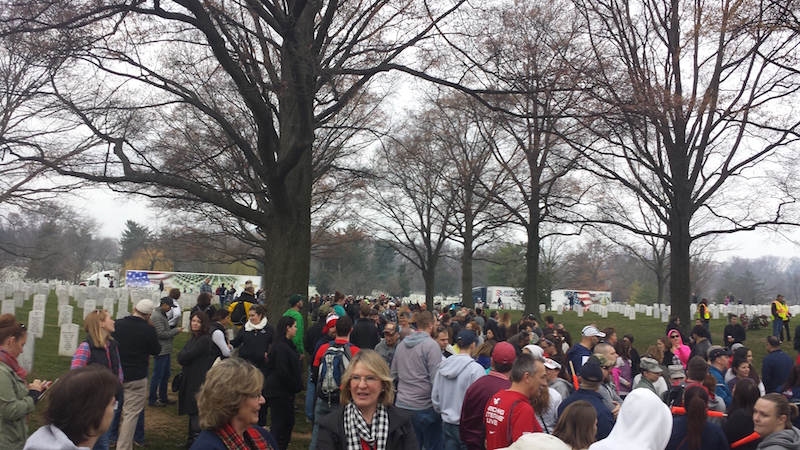 As the morning progressed, more and more volunteers came shuffling in. Soon, the sections were lined with volunteers. Then the trucks came rolling in. All of them beautifully decorated with slogans, military insignia, holiday images, and the respective sponsor logos. It truly was awe inspiring.

During all of this, the truck designated to my grandfather’s section rolled up. The crowd descended upon the truck, all participants ready and willing to begin the day’s event. Unlike many of them, I knew that a flyover by Marine One was what would initiate the event.

However, with all of these volunteers I wasn’t sure I would be the one to lay a wreath on my grandfather’s grave. “Is there anyone here with loved ones interred at Arlington?” the truck captain boomed over the crowd. Myself and handful of others raised our hands, and we were instructed to move to the front of the crowd.

After a flyby of Marine One, the event was underway. Fortunately, I received a single wreath and moved to my grandfather’s grave before the crowd closed about the truck tighter. As I laid the wreath at my grandfather’s grave, I truly can’t describe the feeling that came over me. In that moment there wasn’t anywhere else I would have rather been. The only thing that would have made it better was to share the experience with my family.

After a quiet moment with my grandfather, I made my way back to the section where my co-workers were already sure to be hard at work. A newfound spirit of commitment took the place of the hunger and fatigue that had plagued me earlier in the morning. I arrived at the truck and set to the task of unpacking wreaths from the back of the truck.

We spent until about 1PM distributing wreaths off the back of that semi. Despite the chill, I had abandoned my jacket as I had worked up quite the sweat. Totally worth it by the way. As the last of the wreaths were handed out, I took a moment to look out across our section and the portion of the cemetery that was visible from the back of the truck. The sight was truly amazing.

After a leisurely stroll back to the parking lot with co-workers, the day came to a close, and I headed home. What had started out as an abysmal morning had turned into one of the happiest memories I have about the Christmas season. 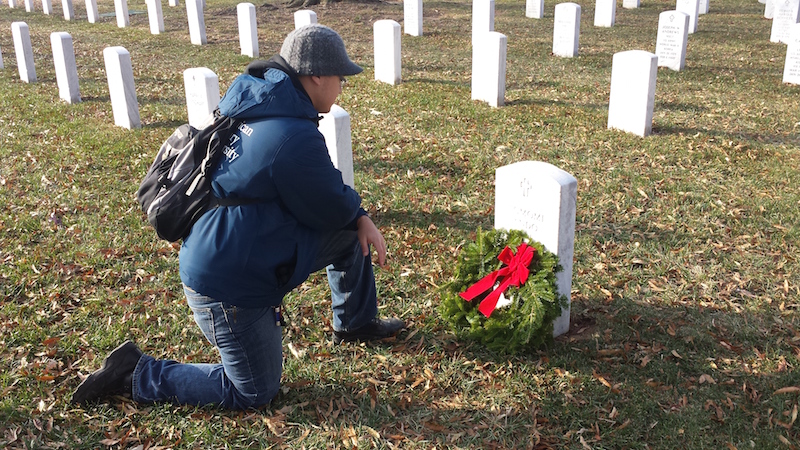 I’ve participated in the Wreaths Across America ceremony for several years since that first event. However, I’ve expanded the group to include other members of my family. In fact, a reminder email from my mother asking about when we want to lay our wreath this year is what inspired this article. Each year I lay a wreath at my grandfather’s grave, I am overcome with so many emotions.

In 2014, my mother joined me for the ceremony, and it marked the first year that every headstone had a wreath at Arlington. While I am sure this was a momentous occasion for the founder (Morril Worcester) and his wife (Karen Worcester), it marked the beginning of a tradition I hope will not soon be forgotten for my mother and I.

In the winter of 2016, my grandmother joined us to lay a wreath on her husband’s gravestone. We purchased our own wreaths from Edison High School (both my mothers and my alma mater) in Alexandria Virginia. Unfortunately, that would be the last opportunity my grandmother would have to join us. She passed away in March of 2017, and now lays with her beloved husband. Henceforth, there will be two wreaths laid at the headstone.

In a world where everyone is so focused on tomorrow, this event pays respect to the service members who have paved the way for us. I highly recommend getting out and participating in an event near you. Each person’s experience will be different, but I can promise you that you won’t regret the decision. The wreaths event is a great way to build memories with your family and truly get to the heart of the holiday season.

How Can You Participate In Wreaths Across America?

Hopefully, this story has inspired you to participate in the Wreaths Across America event. This year, the event will take place on December 15, 2018. While I will be visiting Arlington National Cemetery, you can volunteer to lay wreaths at a number of locations.

If you can’t find a location near you, you can always volunteer to start one. Check out the Wreaths Across America website for information on how to do this. Another way to further this cause is to donate wreaths to be laid on the headstones of service members. However you choose to support this great cause, you have my most sincere thanks.

1 thought on “Wreaths Across America: Giving Back In Memory Of Those Who Gave So Much”